Naboo is a lush, green planet filled with magnificent cities and flowing rivers. It has three moons, which are during the night hours. It is usually the next step after Tatooine and is probably the easiest planet in the game. Much of its wildlife is harmless, and, unlike most planets, its main attractions are not in the wilderness.

Naboo is best known for its gorgeous capital of Theed, but it's home to many other cities. One may build homes and facilities on the planet. Creatures that roam the planet vary from veermoks to giant peko peko birds.

Some areas of interest are the Emperor's Retreat, the Dee'ja Peak Waterfall, the Gungan Sacred Place and the Keren Street Race.

Naboo has five NPC cities. These are Dee'ja Peak, Kaadara, Keren, Moenia, and Theed. Many of them are near rivers (Keren), waterfalls (Dee'ja Peak and Theed), swamps (Moenia), or water in general (Kaadara). Moenia, has a reputation as an artist's retreat, and so is left alone by the Empire. It is the planet's Alliance stronghold. Dee'ja Peak is the planet's Imperial stronghold.

The Galactic Moon Festival is celebrated in Moenia.

Naboo architecture makes much use of domes, usually colored green. Players can build structures of this style on Dantooine, Naboo and Rori.

Naboo is dominated by rolling hills and grasslands, with a few trees scattered about. There are many lakes and rivers, as well as scenic waterfalls.

Naboo generally has pleasant weather. Rain isn't as common as it is on some other planets. When near a swamp, however, the landscape becomes foggy and the difference between night and day is somewhat blurred, as the sun is barely visible. Moenia is built in this foggy environment. 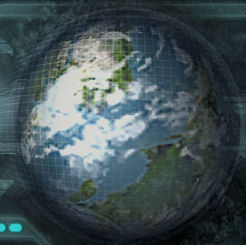 Naboo as seen in the transition screens 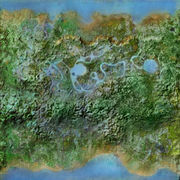 Naboo is part of the Naboo System.

Famous for its triple waterfalls.

A coastal town near the northern ocean.

Site of the Keren Street Race. A river divides the city into two halves.

Technically not a city, this secluded spot is near Amidala's Beach.

This city is thought of as an artist's retreat, and is in the middle of a foggy swamp.

The magnificent capital of Naboo is home to the planet's ruler. It is also the largest city in Star Wars Galaxies.

If you look around areas with tall grass, such as the plains around Theed, you will often find unattackable frogs. These hop around and have no significance whatsoever, but are always a fun thing to look at.