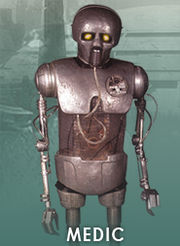 Medics have been an essential part of civilization and, more importantly, warfare for longer than any historical records care to remember. Notable medics from the Star Wars Canon include the 2-1B droid that nursed Luke back to health after the Battle of Echo Base, and the Jedi Healers Barriss Offee from the Republic era and Cilghal from the New Republic Era.

In game, Medics use the powerful healing properties of bacta to keep others alive before, during and after combat. Their remarkable knowledge of anatomy and medicines allow them to counter the detrimental effects of toxins, diseases, and even battle wounds.

The nature of war dictates that Medics also know how to fight. Some medics use their medicinal knowledge to poison or disease while others fight with blasters.

Heals:
Heals require 50% action to use but do not consume the action. Note: All forms of Resuscitation (Revive and Area Revive) come in both a PvE and PvP form, and can only be used if a player is killed by an NPC or by another player respectively.

Most skills require a prerequisite, be it a minimum CL, or a prior skill.

With the use of expertise, medics can affect their healing or their combat prowess positively. The following abilities are available through the spending of expertise points.