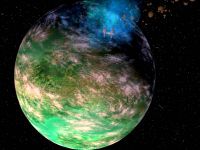 Kashyyyk as seen in space

Kashyyyk, a verdant and tree-covered world, was introduced in the Rage of the Wookiees expansion. Upon first landing on the planet, visitors may note with dismay the small planetary map that appears. From this initial glimpse, one might assume Kashyyyk no larger than one-twentieth the size of a standard planet, when this is not the case. Kashyyyk is split up into multiple zones, such as Kachirho, the Etyyy Hunting Grounds, the Rryatt Trail, each with its own map and unique temperament. The zones are of varying difficulty, as well; Kachirho, the player's starting location, is a generally friendly place with peaceful animals, while places like the Rryatt Trail are more dangerous.

In addition to having a different layout from the other planets, Kashyyyk also differes from the original planets because it has large expanses of "blocked" land that can not be traversed by the player. This means that most gameplay is confined to the given trail, and players can not take shortcuts through more rugged terrain.

The entire planet can be considered a giant theme park, as nearly every NPC you run into on the surface will be involved in quests of some kind. Many quests involve the native Wookiee populations and their attempts to free themselves from Trandoshan slave clans. Others allow the player to help the small Zssik clan overthrow the Blackscale clan as the ruling Trandoshan force on the planet, in the process destroying the Blackscale Avatar Platform space station. Rodian hunters also make a significant appearance on Kashyyyk, as do Chiss poachers attempting to ruin the Rodian expedition.

Players will find a myriad of rewards from Kashyyyk quests, from paintings of the Clone Wars to unique weapons to several new starfighters to new mounts.

Upon landing on Kashyyyk, players will be placed in the city of Kachirho. From this city they can venture to Etyyy (the Rodian Hunting Grounds), the Rryatt Trail, the mysterious Kkowir Forest (home to the Myyydril Caverns), or the Blackscale Slaver Compound.

Because each zone is distinct from the others, POI listings will occur on individual zone pages.

Kashyyyk is a completely no-build planet. No structures or Player Event Perks of any kind may be placed here.

Kashyyyk is part of the Kashyyyk System.