Corellia is one of the Core Worlds, planets of great importance that lie near the center of the known galaxy. As such, it acts as the largest, most populated planet in Galaxies, home to the largest cities and most hyperspace routes of any planet. Its strategic location in the galaxy brings innumerable wealth to Corellia, which helps the planetary CorSec police maintain independence from Imperial domination. However, Corellian cities are open to control by factional forces and do take part in the planetary control meta-game.

Corellia is also home to the faithful CorSec Squadron, and those wishing to learn the piloting profession from this organization should seek out Sergeant Rhea.

Like its neighbor Talus, Corellia is dominated by open grasslands, dense forests, and long beaches that make every corner of the planet a picturesque sight. Most areas of the planet are a quick ride from at least one major city, although the north-western mountains remain isolated from civilization; rumors hint at a hidden Rebel base somewhere in the area, though Imperial forces have been unable to verify these allegations. CorSec security has been similarly powerless to eliminiate the presence of terrorist Nyax, Drall, and Afarathu organizations that make their homes among Corellia's varied terrain.

Doaba Guerfel is one of three cities that celebrates Life Day.

Corellian architecture is marked by tall buildings featuring a distinctive curve at their tops. Many Corellian cities also have small gates with bright lights adorning their sides. Architecture of Corellian NPC cities seems to be different by city; towns like Kor Vella and Vreni Island feature short grey buildings with slanted sides, while larger cities like Coronet and Tyrena feature more curved buildings with windows.

Players can build Corellian Style Architecture in Talus and Corellia.

Corellia is a very yellow world, marked by rolling yellow fields and bright yellow skies. Most trees are coniferous. Corellia also has high, snow-capped mountains along its edge.

A large, swirling cloud formation, as well as several moons can always be seen in the skies of Corellia. However, there is very little weather exclusive to Corellia. It is important to note that when players enter the Agrilat Swamps, the sky turns blue and hazy, similar to the way the sky turns green and hazy when entering a Naboo swamp.

Corellia is part of the Corellian System. 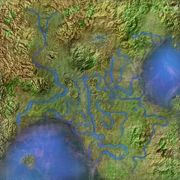 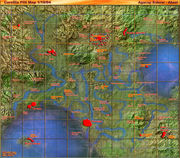 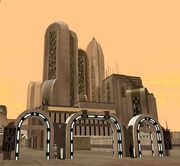 A secluded city near mountains and some woods.

The capital of Correlia. An extremely large city filled with towering skyscrapers.

A strange, strung out town built on a series of plateaus.

A city divided into two major sections, connected by a long bridge. Serves as a recruiting station for beginning rebel pilots.

An island in the southwest sea of Corellia.